Originally latkes are Jewish Potato Pancakes. These are pan-fried potato pancakes. Authentically Latkes are made with shredded potatoes, eggs, onions, and salt. Often flour, breadcrumbs are used for binding purposes. Eggs also help in binding potatoes. And no Hanukkah celebration is complete with these tiny golden potato latkes.

But the vegan version of these latkes or pancakes has no eggs. Here we are using little flour to bind the potatoes to give them the shape of pancakes so that they won't fall apart while making.

These little vegan potato pancakes are not only quick and easy but also the best vegan potato appetizers. Savory and crispy latkes are perfect for any occasion. This is an easy weekend breakfast recipe also. I don't make them on my weekdays as it's a little tricky than my lazy vegan recipes.

These potato pancakes are kid-friendly as well. Who doesn't like potatoes on this earth!! I just love any potato dishes. Read my vegan potato recipes collection on this blog. They are super easy and delicious too. You will love em all.

Potato latkes (pancakes) are easy to make but there are a few tricks to follow to make the latkes perfect every time you make them. This is a vegan recipe. Hence we are not adding any eggs, dairy products.

Before grating the potatoes, you need to wash and peel the potatoes well. Then start grating it using either a food processor or manually using a large perforated cheese grater. This is because the thicker chunks make the latkes crispier.

Fine graters will not deliver a good result in this case. In such a case, the potatoes will become mashy and will spoil the whole recipe.

Immerse the grated potatoes in ice-cold water for 10 minutes. Cold potatoes make crispier snacks just like my homemade potato chips. However, this step is completely optional.

The main task in making latkes is making the potatoes dry. That means you need to grate the potatoes first. Next, take all in a cheesecloth.

And squeeze hard and make sure you squeezed out the maximum amount of liquid in this process. Otherwise, you will have to add more flour to bind it properly.

Step 3 - Add the flour and seasoning

To the squeezed potatoes, add in flour, salt, pepper, and any other seasoning if you want.

Now place a heaped spoon of the flour mixture on the hot pan. Make sure the pan is hot enough before placing the mixture on it. Press it with the help of a spatula or spoon to spread the batter lightly and make an even top with 1/4 inch thickness.

To make it an even healthier option, add whatever veggies you want to add like grated zucchini, carrots, etc. While writing this post I have another recipe idea in mind. I will replace potatoes with shredded cabbage. That will too turn out crispy and crunchy. Check out this zucchini fritters recipe.

Serve these latkes hot. Don't make it in advance and reheat as reheating won't make it crisp like when it's hot.

Serve the potato latkes or potato pancakes with classic sour cream. Or use any dip of your choice. This may go well with spicy tomato ketchup, peri-peri sauce, or spicy chipotle dip. I love any of my fritters with hot spicy dips especially peri peri dip.

Which potatoes are best for latkes/ potato pancakes?

High-starch potatoes like Russet potatoes are best for these pancakes. Because of high starch, the latkes won't fall apart and at the same time would require less flour for binding. 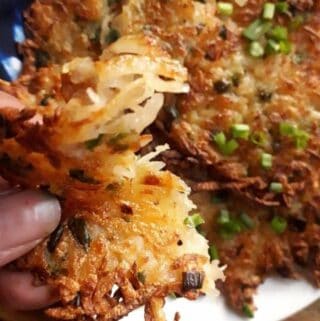 You may keep the potatoes in ice cold water for 15 - 20 minutes. This will make it crispier. But this is completely optional.  Remove all liquid out of grated potatoes by squeezing with help of a napkin or cheese cloth. Use large perforated grater for grating the potatoes. Serve them hot else it will turn chewy.
Keyword Vegan Appetizers, Vegan Potato Latkes, Vegan Potato Pancakes, vegan potato recipes
Tried this recipe?Let us know how it was!