Baby potato dum biryani is a dum cooked biryani recipe with tender baby potatoes. Like all biryanis this is also an aromatic and fragrant rice preparation. You can serve this with simple cucumber raita.

I have shared instant veg biryani in blog. I had made that instant biryani in pressure cooker. That's quicker way to make biryani in just 15 minutes.

However this dum aloo biryani is cooked using dum cooking method. In this method, you need to seal the cooking vessel and cook in low flame. This way aroma will be sealed in biryani.

I am using baby potatoes for this biryani. But you can use large potatoes as well. Chop them into larger cubes.

This is not only tasty and flavorful but also simple and easy to make.

Boil baby potatoes. Once cool peel off their skin and shallow fry till golden.

Now take one heavy bottom biryani pot. First layer it with gravy. Then put second layer with rice. Sprinkle some biryani masala, coriander and mint leaves, brown onions. Then next layer with rest of aloo gravy. In the end add one more layer with rice.

Seal the vessel and lid with flour dough. Simmer on low flame for 15 - 20 minutes. Turn off heat and after 5 mins open the seal and the pot. Biryani is ready to serve.

Also read dum aloo and kashmiri dum aloo recipe on blog. Though this dum aloo is popular by "dum" naming, there is no dum cooking method involved in these recipe. Also if you love potato or aloo, then read other potato recipes on blog.

And for me the list is unending in fact. Here I would love to share one simple yet tasty Manipuri potato dish Aloo Kangmat from Lathi's Kitchen and one delicious bengali dish Badami Aloo from Foodies terminal. These two are a must-try potato dishes. 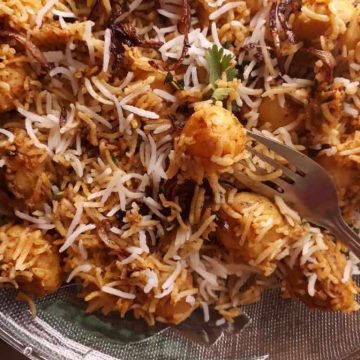