Biryani is a popular one-pot dish in Indian Subcontinent. It has developed in Royal Kitchen of Mughal Empire.

Biryani is basically an one pot dish and prepared by mixing vegetables and rice, cooked in one pot.

Dum Biryani is another popular biryani with different cooking method. However  this instant veg biryani is a quicker version of traditional biryani.

Pressure cook vegetables and rice together in pressure cooker with aromatic spices. To make this fragrant biryani we use biryani masala which is a special spice used to make biryani recipes only.

Though almost similar, pulao is a lighter version of biryani. In pulao also vegetables are cooked with rice. but again difference of spice and cooking method makes them different.

1 Use lots of veggies to the biryani.

2. Soak rice for 10 minutes before cooking. Use long grain or basmati rice to make biryani

3. Ratio of rice to water should be 1: 2 even if you are adding lots of vegetables, it won't require extra water.

4. Use ghee in place of refined oil.

5. It is essential to add curd to bring out that flavor of spices.

7. Add some browned onion slice to the biryani for garnishing.

8. Add whole spices in this preparation.

Some Side Dish to accompany biryani:

Raita is best accompaniment for any type of biryani. Read my best 9 types of raita recipes to accompany your biryani dishes.

Another one is salan like mirchi ka salan, bagara baingan, bhindi salan or dahi baingan goes well with biryani. 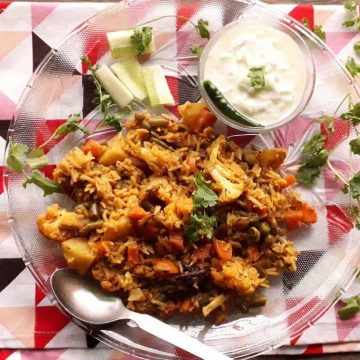 Keyword Easy Less than 30 minutes Recipe, Indian Rice Pulao
Tried this recipe?Let us know how it was!