Naan is an Indian flatbread made from a fermented dough of all-purpose flour. This vegan naan is a dairy-free version of an authentic naan recipe along with a few other versions of naan like butter garlic naan, bullet naan.

Naan is an Indian flatbread and a popular restaurant-style flatbread. In India, for regular everyday flatbread (roti), we use whole wheat flour. Which makes it different from that of the tortilla which is made with refined flour.

Similarly, this naan is made with refined flour. You can also make naan with wheat flour or with a mix of flour. But the softest and fluffy naan comes from refined flour or all-purpose flour because of the gluten content in the refined flour.

However, I won't recommend this for an everyday menu because of the high gluten-content flour. But occasionally on special occasions when you wish to treat yourself to restaurant-style food, you must make this naan at home. These homemade spongy, pillowy naans are no less than any Indian restaurant-made naan.

Naan is specially charred in direct flame or fire just like tandoori roti. Special clay fire (Bhatti) is used for making such naan or roti which gives that authentic flavor to the flatbreads. However, you can give the charred flavor at home also. Refer to my tandoori roti on tawa recipe to follow the instructions to make a dhaba style naan. This vegan naan is just a dairy-free version. Rest all process is the same as the original recipe.

This is a traditional variety of naan. Here finely chopped garlic is used while rolling the naan bread. Along with cilantro leaves and nigella seeds. Adding garlic to the naan adds extra flavor to the naan.

Butter naan is very much similar to garlic naan but with little lesser garlic or even with no garlic toppings. Here only toppings you will see are nigella seeds and cilantro leaves. These are popular street food also in India.

Bullet naan is a little more towards spicier flavor. Hence the name bullet. However, you can adjust it as these are only the toppings. In bullet naan, the toppings are jalapeno or chilies along with regular cilantro leaves and nigella seeds.

Lachha naan is nothing but lachha paratha made with the same naan dough. I have made lachha paratha with whole wheat flour. But here the dough is made in the same process of fermenting flour with yeast and then rolled in layers just like lachha paratha. (lachha means layers).

Chur chur naan is a little different. This is a stuffed and layered naan. Again the method of preparing the dough is also different for this recipe. I will make a separate post for Amritsari chur chur naan.

Peshawari naan and Kashmiri naan is made with the same dough. But then the toppings differ with pistachio/ dry fruits and lots of cheese. So this naan is a cheesy naan.

Other Indian Flatbreads to read:

How to make vegan naan from scratch?

Leavening Agent:- Dry yeast or instant yeast + sugar + water. Sugar helps to activate the yeast. Make sure to use fresh yeast since they lose their leavening properties when stored for long. So try not to store them for long. For some extra spongy, you can also add 1/2 tsp baking powder. But it's completely optional to add baking powder if you are adding yeast to make the naan bread.

In a bowl take lukewarm water. Add instant yeast and sugar and leave it for 10 minutes till it's a bit foamy on top. Once it's activated, add non-dairy milk, a pinch of salt, baking powder, and Flour.

Knead well to a dough. Cover with a damp cloth and leave it for 30 - 60 minutes, so that the flour will ferment and rise. Brush it with little oil. You can also use an instant pot to quicken the fermentation process.

After 30 minutes knead again for 2 minutes. Divide the dough into equal portions.

Take the roundels and pat to small discs. stick some finely chopped cilantro leaves and nigella seeds/ sesame seeds on top. Then roll it to a circle or oval shape.

Heat a skillet (preferably cast-iron skillet). Place the rolled naan on tawa. Once you see bubbles on the surface, flip to the other side. Cook for a minute or two. Remove from heat. Brush with vegan butter. (for nonvegans or vegetarians brush with ghee or butter. (However, this will not give that authentic charred flavor of Tandoor (grill))

Heat the skillet. Now brush the backside of the naan with water. Place the wet side of naan on the skillet, so that the side will stick to the skillet. Now when you see bubbles on the surface, flip the skillet. This method will give a charred flavor as the naan will be cooked in a direct flame (like tandoori roti). Once cooked, brush some butter or ghee on top.

What is different between kulcha & naan?

How naan is made soft and fluffy?

Naan is generally made from fermented refined flour dough. The gluten gets activated when you knead it more. Also, the yeast and sugar leavens the dough and helps to rise to make it airy. So when you make flatbreads out of the dough it becomes fluffy and airy.

Bullet naan, Kashmiri naan are similar to butter naan other than the toppings. In bullet naan, the toppings are cilantro leaves and jalapeno. So it's a little towards the spicy side. Whereas the classic butter naan has sesame seeds, garlic is topped. Similarly, Kashmiri naan has toppings of dry fruits such as pistachio, cashews, raisins. These dry fruits give this a slightly sweet taste.

Can I make the naan using instant pot?

Can I make vegan naan using a microwave oven?

Yes. Naan is similar to other flatbreads other than fermentation. Fermentation is the main part of the recipe. This takes a few hours. So you can quicken the process by placing it in the oven for some time to proof the dough and to ferment. Also, you can bake the rolled naan in the oven.

Is traditional naan is not vegan?

No. Authentic Indian naan is not vegan because of the use of greek yogurt or curd, and milk. Also, the recipe calls for butter which is a dairy product. So, in turn, to make this a vegan flatbread, we need to replace dairy products with non-dairy butter and non-dairy milk. 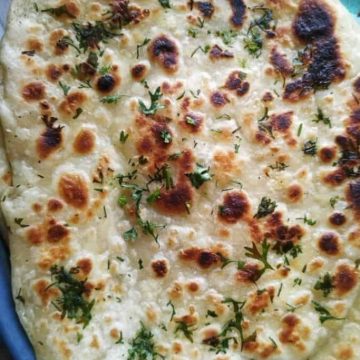