Cauliflower is one of the low carb and healthy vegetables. This vegetable is recommended for the keto diet also.

Other cauliflower recipes are:

Cauliflower is a versatile vegetable I must say. You add it to any dish, I'll enhance the taste of the dish. Normally this is widely available in winters in India. But nowadays you may get them all season. But the fresh aroma is what you will get in seasonal ones.

What is tikka masala?

Tikka masala is an Authentic Indian curry recipe made with lots of aromatic spices. The preparation method is a little bit different than regular curry.

This is typical curry preparation of North India and very popular in street-side vendors or dhabas. If you ever travel via road in the north like Panjab, Chandigarh, and all Northern Indian in fact, tikka masala is a popular dish like dal makhani and dal tadka. This goes well with tandoori roti or naan of dhaba.

Tikka is a grilled item (vegetable or paneer) that is soaked in a marination mixture. Basic tikka marinade is a mixture of spices and hung curd. For the binding, we use roasted gram flour.

I know the list of spices is quite a long list but that brings in that unique flavor. **When we add leftover marinade mixture to the gravy and simmer, the gram flour makes the gravy thicker consistency.

How can I make Vegan Cauliflower Tikka Masala?

Yes even if you are vegan you can make this curry into vegan. Cauliflower is one of the best for vegan and keto diet as well. But here to make the tikka masala vegan, you need to replace hung curd with vegan dairy-free curd, like coconut yogurt. 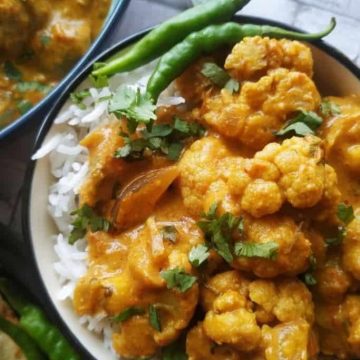 Take hung curd or thick curd for marination. Use dry roasted kasuri methi and crush them before adding. Boil cauliflower till it's cooked al dente. Don't over cook it very soft else it will be mashy.

How to make cauliflower tikka masala in restaurant-style?

Clean and cut cauliflower into little larger chunks. Parboil them for 4 - 5 minutes. By this, it will be a little softer and will get cooked easily.

Then heat 2 - 3 tbsp oil in a pan. Shallow fry the coated veggies till they are golden and change color. Remove from pan once they are done. Fry in batches and don't overcrowd the pan. Keep aside.

Take out the cauliflower chunks and place them in the container. Start at 400F and set the timer to 10 minutes. Pause at 5 minutes and shake for uniform cooking.

Start and cook till the timer goes off or cauliflower pieces look cooked. Shake at every 3 minutes interval until done.

Once cauliflower is done, place the bell peppers, onion chunks and cook for 2 minutes at same temperature.

If you are making cauliflower in batches, set the timer for 8 minutes (2 minutes lesser) for the 2nd batch.

First, soak 10 - 12 cashew nuts in hot water for 10 minutes. After 10 minutes add them to a blender along with chopped tomatoes and green chilies (optional).

Heat oil in a pan. Add finely chopped onions or onion paste. saute for 2 minutes till it's translucent and starts releasing oil.

Add ginger-garlic paste and saute for a minute. Now add tomato & cashew nuts puree and saute till it's cooked well.

Add dry spices and left out marination mixture to the gravy (it will help in making a thick gravy and will be creamy).

Now add tikka veggies and simmer for 5 minutes by covering with a lid. Add kasuri methi and finely chopped coriander leaves. Give it a nice stir and cook for 2 minutes more.

Our yummy delicious cauliflower tikka masala or Indian gobi tikka masala is ready. I don't add additional cream to this but if you like it creamy add 2 - 3 tbsp fresh cream and give it a nice stir.

This rich creamy curry is best paired up with any breads and rice. Serve this with tandoori roti or lachha paratha or naan or even with steamed rice or jeera rice.