Soya kabab or soya cutlet is a healthy high protein snack. This is made with soya granules or minced soya along with few veggies. You can pan-fry, bake, or air-fry the patties for a healthier twist.

This is one protein rich appetizer. It's vegan and gluten free. Soya chunks kabab was in my to-do list since long. Finally I made that. This is a super easy and quick kabab recipe.

Also, soya chunks are the best vegan substitute for ground meat. It's rich in protein. Do you know this textured vegetable protein contains a higher amount of protein than that of lentils. So you must include this in your diet for a protein-rich meal. No doubt this is one of the best sources of protein for vegetarians and vegans.

Best kind of soya for the kabab

For this recipe you can take any variety. I have taken larger soya granules as that was available with me. But best is minced soya. Anyways, the larger chunks you need to mince first.

Process will be same but with larger chunks there is one more step that after soaking, I had to mince the chunks to smaller pieces. You can do that in food processor or high-speed blender. Put soaked and squeezed chunks in processor and pulse once to get small granules. That's it. You are done.

Also you can add any other vegetables also to this kabab. I have added green peas to get that nice green tint in my kabab. You can add crumbled paneer, grated carrots, cabbage etc.

When we insert seekh or skewer it's called as seekh kabab. Originally seekh kabab is a kebab that is made with minced meat. But we can replace that meat with vegetable mixture.

I wanted to give it a shape of seekh kabab but ended up making discs like cutlet. So things are the same only shaping is different. You can also use a cookie cutter to make different shapes. Kids love them for sure. And this is a great way to add protein to their food too.

Well for binding I'm using bread crumbs. But you can also use roasted besan or gram flour for this recipe. So again with gram flour the kabab will be gluten-free.

How to make soya kabab?

If you have soya granules then skip this step and directly add to the mixing bowl with mashed potatoes and peas.

Soak soya granules/ minced soya in boiling water for 5 minutes covered with a lid. Add a pinch of salt as well. After 5 minutes remove from hot water and wash it with cold water 2 to 3 times. Squeeze out every time to remove that foamy water. Squeeze out all water and put it in the food processor. Pulse it once or twice till you get nicely minced chunks.

Take boiled and mashed potatoes in a mixing bowl. Add blanched peas and minced soya chunks. Pulse it once more to mix them. Now add bread crumbs and all spices and salt to the mixture. Mix all ingredients. Now divide it into equal portions.

Grease your palms and shape it into discs or use cookie cutter to shape it different.

You can also coat this with bread crumbs to add little more crisp. For that make a slurry with cornstarch and water. Dip the kabab in slurry and then roll it on bread crumbs.

However this step is totally optional. You can directly panfry or bake the kababs without bread coating.

Heat oil in a pan and place the shaped cutlet pieces on pan. Shallow fry the kabab till golden and crisp. Keep flame on medium high flame.

Flip to other side carefully after 3 - 4 minutes so that one side is fully cooked and turns golden in color. Pan fry both sides equally.

Remove from pan once done and place on paper napkin to soak excess oil. Serve with ketchup or mint chutney and sliced pickled onions. 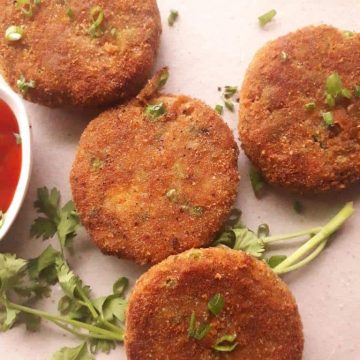