Paneer Tikka Masala is one of the most loved paneer recipes in India. This is a rich and delicious dish. Since North India is famous for rich dishes, it's more loved in North India. It's one of my best dishes until now.

Paneer or Cottage cheese has a very special place in Indian vegetarian cooking. This is a versatile dairy product.  It tastes great in any form. You can use them for preparing appetizers, main course or even in desserts.

Normally I make paneer at home for any such dishes. But for this recipe I have used store brought paneer. In fact one of our friends had started a dairy firm (Godhenu Dairy Firm) and these paneers were sample ones. Well, the quality of paneer also matters in the preparation of any such dishes. When the paneer is fresh, it makes the dish more scrumptious.

What is paneer tikka masala made of?

Paneer tikka masala is made by marinating paneer cubes and shallow frying them before adding to curry gravy. Marinated paneer cubes can be grilled for this recipe. This dish is a perfect combination of spicy and creamy gravy with sauteed paneer and crunchy veggies.

Paneer cubes and crunchy veggies like bell peppers, onions and tomato cubes are marinated in a mixture of curd and spices such as:

If you are vegan, replace the paneer with tofu which is available in any supermarket. Tofu is made from soy milk and this is an even healthier option and a rich source of protein. Instead of paneer or even tofu, you can make theses tikka masala with cauliflower and mushrooms as well. Also, use vegan curd for the marination process.

So try this cauliflower tikka masala with the same recipe and do share your feedback in the comment box. I will also make and share my version of Vegan Cauliflower Tikka Masala and mushroom tikka masala soon.

Paneer tikka masala is a rich creamy onion tomato curry base dish. This is best served for the main course. But you can make simply Paneer tikka as an appetizer for parties and special occasions. This goes best with tandoori roti or butter naan. This will give you the full satisfaction of restaurant-style food.

Also, try my tandoori paneer tikka without tandoor (on stovetop)

In case you don't have a tandoor, then also you can make them on the stovetop on direct flame. Apply ghee or butter on homemade tandoori roti and serve them with this rich spicy Curry. What a heavenly combination!!

The real magic comes with the best quality of paneer and proper marination in the blend of spices is the most essential part of making tikka or tikka masala. For the best result, you need to marinate paneer and veggies cubes in the marination mixture (curd & spices) for more than 30 - 40 minutes.

So this is not a quick recipe. You need to plan before you start. Adding gram flour helps in the proper binding of spices and shallow frying process. Else it will stick to the pan. Use nonstick pan for making tikka if you are pan-frying them.

You can grill them or use a microwave to make tikka. Another method you can put them in skewers for tikka. I shallow fried in the pan so I have not used skewers. 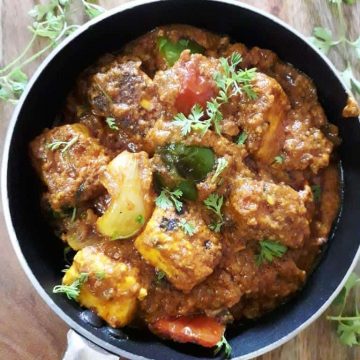 Preparation of Gravy and Presentation

Keyword Indian Curry
Tried this recipe?Let us know how it was!