Spices that we use in our kitchen are really magical and each produce distinctive flavor, taste, aroma. Along with distinctive aroma and taste each spice has some medicinal value when taken in moderation.

We all must know some or the other home remedies from our grand-mother and mother which were using the spices and herbs from our kitchen. E.g. if you have cough cold drink turmeric milk in night, have ginger n honey. Tropically also applied on wounds as it has antibiotic, anti-bacterial and anti-inflammatory properties.

If you have gastric problem then asafoetida (hing) is useful as it cures digestive disorder. Cardamom is useful for bad breath. The hot flavor of chili adds to increased metabolism. Cumin is rich in iron & helps in liver detoxification and beneficial for digestive system. Coriander is an excellent source of minerals and an antioxidant. Mustard rich in omega 3 fatty acids helps in performing cellular metabolism efficiently. Cinnamon is very helpful in controlling insulin level and helpful in controlling diabetes. The list of medicinal properties of these spices is unending and still area of research for science.

So these spices not only useful in culinary in enhancing the taste but also plays significant role with their unique and distinct medicinal properties.

The spices are not only colorful but also these are beneficial in thousand ways and have been used since ancient ages. If you refer to our history the spices are of high value and are centre of trade from medieval period. E.g. Britishers referred Black pepper as Black Gold because these have high value in European countries and were produced and exported from Indian states. Many parts of country has been acquired by East India Company as they were rich source of spice and helped them to trade on it easily and profitably.

Cumin seeds are most essential part of our daily cooking because of its strong and punching aroma. It’s full of medicinal properties as well. Cumin seeds are used both in curries, dry fried vegetables, in all tadka/ tampering. You can also use them in dry roasted form. These are additional seasoning on raita and dal. Both forms give little different taste. However the course powder form of dry roasted cumin gives strong aroma and nutty flavor.

Cumin powder is often found with other blended spice mix e.g. Garam Masala, Curry powder, Chili powder, Barbeque sauce and into many pickle making spice. Also its used in bakery products. But the quantity is less as compared to other spices because of its strong and dominating aromatic oils.

Coriander seeds are also essential part of Indian cuisine because of its mild taste. Apart from Indian cuisine this is major part of Latin American, Middle Eastern and Asian cuisine. This is one of the oldest known spices of world. If you are making powder form of it at home then sun dry or lightly dry roast on medium flame and grind this using mortar & pastel or mixer grinder. This will enhance the flavor. The powdered form will lose its flavor quickly. So store it in airtight container or inside freezer. The seeds are warm, mild with a citrus undertone just like orange peel.

In case of coriander both leaves and seeds are essential in almost all dishes except for the desserts. It’s also major part of many blended spice mix like garam masala, curry powder, sambar masala, and many more including pickle making spice mix. Because of its mild taste you can use in handful amount. Again it has medicinal properties like carminative, refrigerant, diuretic, aphrodisiac and hence used as home remedy to many diseases.

Turmeric, botanically known as Curcuma longa is the root of this perennial plant. It is native to Indian subcontinent and south-east Asia. This is the most common spice in every kitchen. It has pungent, earthy aroma and slightly bitter flavor. It’s yellow in color and plays major role in giving perfect color to the dish.

This super spice has numerous health benefits as dietary supplement and also used for beautification since ancient age. We all must have got some beauty tips from our Grandmas' with turmeric as its main ingredient. Isn't it wonderful!! Yes, nature has stored many wonders for us. Turmeric is has antiseptic, antibacterial, antiviral, antifungal, anti- inflammatory properties. It reduces lever toxins and helps in weight-loss as well. The most famous “Golden Milk” i.e, Turmeric Milk has numerous health benefits. 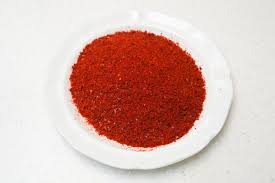 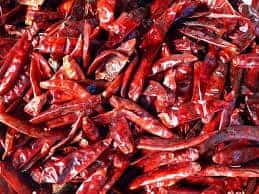 This is the hot spice again used widely in Indian Cuisine majorly. Red chilli powder is Powder form of dried red chillies. This makes the preparation/ dish spicy and hot. The major heat is concentrated in its seeds. India is major producer of red chillies. They are excellent source of vitamin C. But however excess consumption can cause damage to the intestine and gives burning sensation in stomach and intestine. It’s also used in preparation of sauces, pickle other than the regular curry in Indian Cuisine. 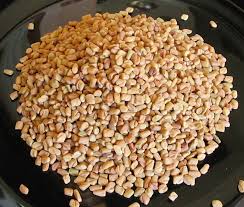 Fenugreek, commonly known as methi is native to Middle East and Indian subcontinent. The leaves are also edible and full of nutritional values. However both leaves and seeds have very bitter taste. Also because of its bitter taste its considered as anti-diabetic and helps in reducing the glucose level in blood and controls diabetes. The seeds are widely used in many pickles and in other curry preparation. The leaves are edible. Dried leaves or kasuri methi is specially used as seasoning in raita and curries of Indian cuisine. This plant is rich in all minerals, vitamins, protein and dietary fibers. 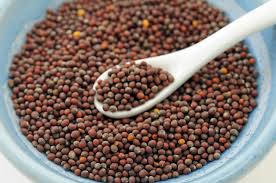 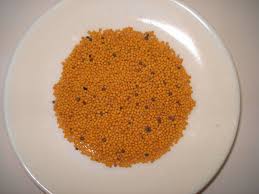 These are small tiny balls ranging from yellow to black. They are important spice with a strong and hot flavor. Both black and yellow mustard seeds when ground with water form a yellowish paste. But be careful while adding mustard paste as it gives slight bitter taste if you use in larger quantity.

The greens (leaves) of the plant are also edible and have a special place in northern part of India (e.g Sarson ka saag). Similarly in West Bengal, mustard seeds play an important role in their food.  Even this is equally useful spice in South Indian Cuisine.

Mustard oil is one of the best and healthiest cooking oil. In many parts they use raw mustard oil in many dishes. India and Pakistan is the major player in production of mustard plants because of the climate condition. 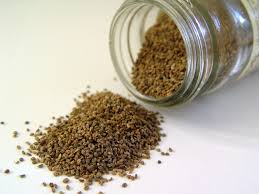 Carom seeds or ajwain in Hindi is known for its peculiar flavor. These are highly fragrant and the aroma is helps in treating cold and flu in toddlers and kids. It’s full of essential oil and flavonoid. It has antibacterial, anti-fungal, anti-viral properties and hence been one of the best home remedy for treating various diseases. It tastes great in combination of flours. Hence ajwain is a vital ingredient for Poori, Paratha, Pakoda, and many snacking items. You can use them in many dry vegetable fries like french beans, okra or lady finger. 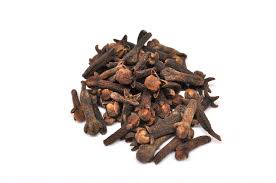 This is an intense spice with very strong aroma. These are flower buds of a tropical tree. It comes in dark reddish brown color. This blends well with bakery products, savory dishes, meats and pickles. It gives rich flavor to curry when added with other whole spices as Garam masala. However it has very strong flavor. Use this in moderation else it will dominate the taste.

The essential oil present in cloves has antibacterial and anesthetic properties. Because of this clove oil is very beneficial in treating tooth ache to large extent. Use in small quantity; else it might burn the area of application. Due to its essential oil it helps in preventing bad breath and used as mouth freshner.

This has also significance in Indian religious activities. 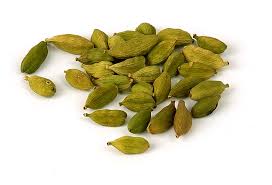 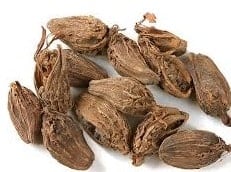 Cardamom is used extensively in Indian cuisine both in savory as well as sweet preparations. This is also a versatile spice which goes well with savoury curries, rice, beverages and in desserts.This is an expensive spice comes in two varieties: Brown (Badi elaichi) and green (choti elaichi). Brown one is large in size and more aromatic whereas green ones are smaller in size with milder flavor and aroma. It plays important role in Indian as well as Middle Easter Cuisine.

These are basically seed pods with strong and sweet aroma. They blend well with all dessert items and cakes and bakery products because of its sweet and strong aroma. It is main ingredient in all kinds of pudding and many baked dishes. It has a distinct flavor even if added and blended in garam masala. Freshly ground seeds are more aromatic than the powdered form available in market. 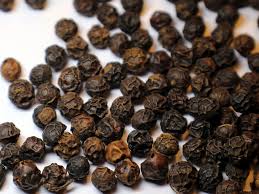 Black pepper was commonly famous as “Black Gold” during Britishers time because of its demand in European market. They had acquired southern part of India as it was main producer of black pepper and was profitable to trade in European countries. It’s grown in other countries as well.

At present Vietnam plays major producer of black pepper and India is 2nd largest player. It’s a major ingredient in not only Indian cuisine but also in worldwide cuisine.

Because of its spicy flavor it adds fierceness to the dish. For additional flavor use it on top of all preparations including fried rice, curries, salads, soups, any form of curd. Add a pinch while making tea and this is very effective in treating cold and sore throat because of its heat. In Chinese cuisine it’s another essential ingredient. However crush the require amount in mortar and pastel or crusher just before use to get maximum flavor out of it. It has numerous medicinal properties including treatment of digestive disorders. 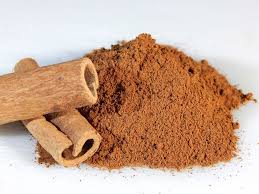 Cinnamon is native to Sri Lanka but grows in many countries like Indonesia, Bangladesh, India, China etc. This is also an important ingredient in all cuisine across the world. Cinnamons produced in Sri Lanka are known as “True Cinnamon”. This is basically the bark of the tree. However it’s different from cassia bark slightly as it has sweeter flavor and fragrance than cassia bark though both belong to same family.

This is a versatile spice. You can use in both savory as well as sweet dishes because of its aroma and flavor. Use it in preparation of savory dishes, meat and poultry dishes, in bakery dishes, in beverages, in pulses and grains dishes. Apart from culinary uses, you may use this super spice as  home remedy for treating many diseases including controlling insulin secretion and treating cognitive disorders. This also helps in weight loss. Add cinnamon and ginger powder in hot water to stop that sugar or sweet craving. 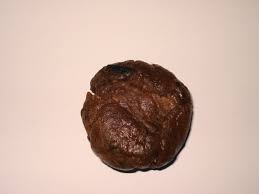 This spice commonly called as hing is native to Iran and Afghanistan but mainly cultivated in nearby India. In India it’s basically cultivated in Kashmir. It has many medicinal properties.

Its pungent smell adds a distinct flavor to the dishes. It’s a standard ingredient in vegetarian dishes such as dry fried vegetables or lentils. It’s the best tampering for lentil based dish such as Dal, Sambar, Rasam. With curd based preparations like Dahi Kadhi, Gatte ki Sabzi, raita etc, it adds that extra punch of flavor. It’s healthy for digestive system. That is the reason this is a major ingredient in food and pickles. If not stored properly it loses its aroma and fragrance. Pure form comes in resin form and characterised by distinct strong pungent flavor. It's also available in dried and powdered form. Store this in air tight container.