This is a fusion recipe of Rajasthani gatte with rice. I have made curry and rice separately and then mixed both and cooked it for some time. I have not used the dum cooking method for this biryani preparation.

However, you can make this biryani using the dum cooking method as well. Read my baby potato dum biryani recipe.

What is gatta made of?

Besan or gram flour is the key ingredient of gatte. This is also healthier food as we use less oil and the gatte logs are in fact steamed or boiled. You can also fry these gatte logs after boiling. But I like it with boiled gatta more.

There is another way of making gatte ki sabzi in which gatta are stuffed and then boiled and then deep-fried. It's known as Govind gatte. Govind gatte is a richer version of plain gatte.

Read my Rajasthani Gatte Ki Sabzi recipe here. This is one of my favorite recipes. Gatte ki sabzi is super easy to make with minimum ingredients. I mean there is fancy ingredients required to make this curry. The same is with my fusion recipe of gatte ka biryani or pulao.

Adding biryani masala and whole spices enhance the flavour of the rice just like authentic biryani recipe. But this is like an Instant biryani (Instant Gatte ka Biryani). You can also make gatte ka pulao by just skipping the magical whole spices and biryani masala. 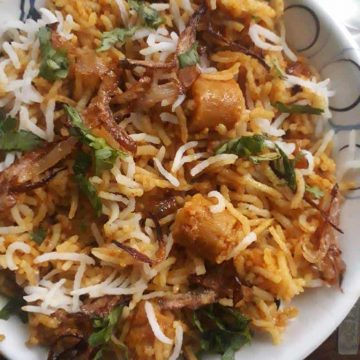 Keyword Indian Rice Pulao, instant biryani
Tried this recipe?Let us know how it was!

How to make gatte ka biryani?

This recipe has 2 steps. 1. Preparing Rice & 2. Preparing gravy. Then mix both and simmer for a few minutes.

Use basmati rice or long grain rice for best results. Prepare rice in a large pot. Add 1 bay leaf, cinnamon stick, cloves, cardamom to the water while preparing rice. So rice will absorb all aromas of whole spices and will be fragrant.

Once the rice is cooked al dente, remove from heat and strain out using a large colander. Then run it under water to stop overcooking of rice as we want non-sticky rice (not mushy).

Make a soft dough of besan and other spices. Make small balls from these dough and then make logs.

Boil them in hot water for 5 minutes or till you see small flaky skins on out. Don't over boil. Be careful while adding these gatta logs to the water add one by one and not all at once. Make sure you are adding each log to boiling water only.

Then remove logs from hot water and divide into 1/2 cm pieces. Keep aside for further use.

At the same time start preparing the gravy. Take thick curd and chopped tomatoes. Put them together in a blender and puree to a smooth mixture.

Add all dry spices (except salt) and mix well. Saute for 10 seconds and then add pureed tomato and curd. Mix well. Hing or asafoetida is an important ingredient while making gatta recipes. It will enhance the taste of the curry.

Add little water if required. Simmer for 3 - 5 minutes or till it's cooked.

Now add 1/4 cup water and boiled gatta pieces. Simmer for 5 minutes or to reach a thicker consistency. Cover with a lid and simmer on low flame.