Let us explore the most-asked question from vegans, especially the coffee lovers - "Can you froth Almond milk?". And the answer is "Yes! and here's how." Here you will see how to froth almond milk in the best possible way.

This is essential for vegan coffee lovers. If you are vegan, and craving a creamy frothy latte, then you have landed in the right place. Make some delicious latte with almond milk frothing. Almond milk latte has become a popular choice nowadays. Even if you are not vegan, you can enjoy this since it's way healthier than dairy milk frothing.

What Is Almond Milk?

Almond milk is a dairy-free alternative to cow's milk (dairy milk). This plant-based almond milk is easy to make at home. It's one of the most popular milk for vegans in recent years.

Almond is a nut that is rich in protein content. So the milk from them is also rich in protein. It's one of the major protein sources for vegans. Read more on the benefits of drinking almond milk.

Almond milk has a creamy texture and a nutty flavor, and it blends well in both sweet and savory dishes.

Almond milk contains half the calories of dairy milk. If you want to watch your calories and still want to enjoy the delicious latte, then you must switch to this healthier option.

Check out the other protein sources for vegans.

We all know the foamy fluffy layer on top of the latte is the froth of the milk. The froth is created by the combination of air and milk fat.

When you heat milk, the water molecules begin to vibrate, and this sets the fat molecules in motion as well. During the whisking of this warm milk, these molecules combine with air bubbles to create a foam.

The amount of froth that forms depends on the type of milk we use. e.g. whole milk is richer in fat than skim milk, so it produces more froth.

How To Froth Almond Milk?

You can froth almond milk in various ways in fact. It's easy to do in any of the ways.

Let us see each of them one by one.

To froth almond milk, simply pour it into a saucepan and heat it until it is steaming. Don't overheat the milk bringing it to boil. Turnoff the heat before that. Then, use a hand-held frother or immersion blender to create the desired amount of foam.

You can also use an eclectic frother to froth almond milk.

Pour the milk into the blending jar and blend on high speed for 1 - 2 minutes. You can see the foam on top layer. Collect the foam and use them on your latte. White blending, it's heated slightly that helps in forming the foam.

Pour the almond milk into a glass jar. Secure it with a tight lid. Microwave for 30 seconds. Then give it a hard shake until a foamy layer is formed.

How do you heat almond milk?

You need to heat almond milk until it's just heat and not bringing it to boil. If you are unsure, microwave it for 30 seconds until it's warm. You can also warm it up with help of a double boiler where the milk won't come in direct contact with fire.

What are other plant-based milk you can use for frothing?

The other plant-based milk like soymilk and oat milk are also great for frothing. Even coconut milk is a great option since these have rich fat also. Oatmilk gives similar dairy like frothing. Only almond milk gives a lighter foam since it has less fat than other plant-based milks like coconut milk, soy milk, etc. However, almond milk froth is the best and healthiest option you can have.

Conclusion - Can You Froth Almond Milk?

Yes, You can froth almond milk easily at home. In fact here we discussed how to froth almond milk in different ways. Frothing almond milk is a great way to add some variety to your coffee. And evenif you are not a vegan, it’s always a healthier option to do. With just a few minutes, you’ll be able to make creamy, delicious frothed almond milk every time. So what are you waiting for? Give it a try! 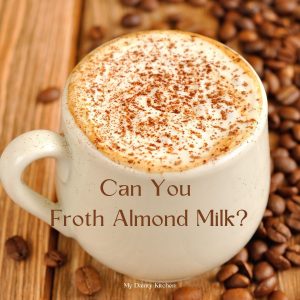 How To Froth Almond Milk

Using A Frother or Immersion Blender

Keyword how to froth almond milk
Tried this recipe?Let us know how it was!